Hello, I’m Eric. I am an Episcopal Priest and I grew up in Austin, Texas on the east side of I-35. My mom is a special education teacher and my dad is a chef; they’re also both ceramic artists on the side. I’ve played classical guitar since I was five years old and as a kid I was featured on the radio show “From the Top” and other radio programs. I continue to be an avid music lover, I play a couple different instruments and I write songs in my free time. 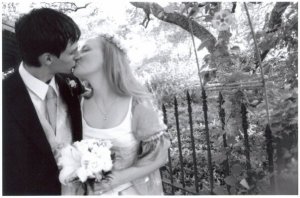 After graduation I married my wife and moved to the Washington, DC area. There I worked as a parish administrator at St. Mary Magdalene Episcopal church in Wheaton, Maryland while Shyla finished her MA in Art History at American University. I was also being sponsored in discernment for the Episcopal priesthood by my home church of St. David’s, Austin.

After Shyla finished at American, we returned to Austin so I could attend the Seminary of the Southwest . During seminary, I traveled to Mexico and became involved in Warm Heart International (WHI) a nonprofit created for the purpose of creating clean water in Malawi. James Tengatenga, then bishop

of the Anglican Diocese of Southern Malawi, invited parishioners and leadership from St. David’s, my sponsoring parish, to visit Malawi and form a partnership, which they did in the creation of WHI. I applied for, and received, two grants to travel to Malawi with a fellow seminarian and record the stories, needs, and working Anglican partnerships in the area, including WHI. Our work helped pave the way for a companion relationship between the Episcopal Diocese of Texas and that of Southern Malawi. During seminary I also completed a Clinical Pastoral Education program and served as a seminarian at Holy Spirit, Dripping Springs.

Woodlands (a 500 ASA church in the Houston area). I was very warmly received at Trinity: our family fell in love with the church and my fellow clergy. I was ordained to the priesthood there and my son Origen was baptized on Easter Vigil in 2012. While at Trinity, I had numerous powerful ministry experiences including helping to lead two mission trips to St. Thomas Episcopal Church on the Spirit Lake Reservation in North Dakota.

Following my curacy, I was recruited to be the Associate Rector for St. Mark’s in Houston, a rapidly growing parish in West University. I also had the opportunity to take over a nascent “fresh expressions” community called St. Mark’s Between the Bayous (BtB). I found a new meeting location for BtB and negotiated a lease for that 2600 sq ft building, applied for and received a diocesan grant to support BtB, and substantially grew the amount of members and activities of that group. Additionally, during my time at St. Mark’s I organized two Lenten music series called “Songs of Lovin’ and Redemption” which brought in Texas singer-songrwriters such as Ray Wylie Hubbard, Billy Joe Shaver, Terri Hendrix, Sara Hickman, Eliza Gilkyson, Sam Baker, Shake Russell, and Michael Hearne. I spearheaded these unique music series based on the belief that creative expression is one of the primary ways that we encounter God on our spiritual journeys and that the experience of redemption is often best expressed through the arts.

I have served for three and a half years on the World Mission Board of the Diocese of Texas. During that time the board has created three significant companion relationships with other dioceses. Already having played a role in their companionship agreement with Southern Malawi, I now advocated for and assisted with the formation of a companion relationship with North Dakota. I lead a delegation from the Diocese of Texas, to gather more information about Episcopal communities throughout that diocese including those on Native American reservations. In 2014 this partnership agreement between the Dioceses of Texas and North Dakota was ratified at our diocesan council.

I currently serve on the Alumni Steering Committee and Blandy Lecture Committee for the Seminary of the Southwest, as the diocesan Spiritual Director for Youth Encounter Spirit (YES) (a renewal weekend for Junior High students), and in 2011, I was elected as a delegate to Province VII’s Providential Synod.

My free time is spent with my family, camping and hiking, going to see live comedy, practicing contemplative prayer, playing music, and enjoying art of all kinds!